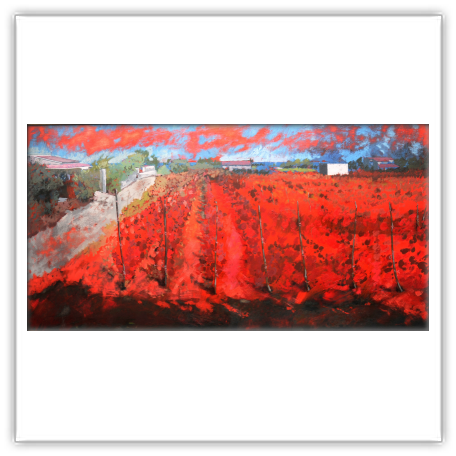 Antonio Debidda was bom in Bortigiadas ( Gallura ), 3 june 1940 in a red trackaman's house with a brooclet closeby whose fresh clear water trickled and indee stilltrickles silenty amid poplars, firs, oaks and plane trees, in an atmosphere of watercolor lights and shades.
However, Bortigiadas was not to be his home. This fact will forever haunt the artist and form a certain hollow longing in his maturing personality: he willalways feel a need for the secure roots one's birthplace offers, the safe comfort a happy and joyous village can provide to those few who choose to remain in the one place they have alwais known.

The village of Martis, were many of ys mother's relatives lived, is his next home and is where he formed his very first chidhood friendships and played his firs games. In this sleepy cluster of houses spread over rough hills the young Debidda leams to appreciate the silence and serenity of the village, to observe and absorb the delightful countryside, the nearby horizon, the closely-grouped houses, the green fields of spring, and especially the sun-soaked land made golden from ripe ears of com in late July. He will never forget these places and these people, returning frequently and feling a comforting sense of wartmth belonging and identity for that small village and its people

In the eternal city he is fascined by the grandeur of its buldings, its monuments and the stimulating artistic environment.
Never satiated, he vistis churches, cathedrals, basilicals and art galleries while unleashing his own sensibility to the cultural and artistic atmosphere around his own sensitivity to the cultural and artistic atmosphere around him. He visis the worshops of Alberto Ziveri and Felice Ludovisi, histwo great masters both belonging to the famous “ Roman school “. In addition, he is to leam a great deal from Piero Sadum, a teacher of art at the Institute he attends and acknowledged abstractionist. Having completed his studies in Rome, he leaves the capital and returns to his native land and his people.

At Perfugas, in the heart of Anglona, where he lives and works for over a decade, he seizes and immortalizes o canvas or card in both oil and watercolours the sense of harmony and beauty, of secret interior responses and intimate poetry that the surrounding countryside and landscape inspire in him. At the same time, he interprets small and large folks giving rein to the emotion and the humanity that the daily existence and suffering of these poor people evoke in him, againt that background of hardship and labour. He is also about to espress human protest in a remarkable painting of men reading newspapers whose serene atmosphere contrast sharply wit the bold writing in red: “ When will there be peace in Vietnam? “. Subsequently, he obtains a teaching post at middle school for Artistic Education and at high school for Drawing and the History of Art. There follws a long and varied exeperience of middle school teaching, taking him to Aggius, Ozieri, Perfugas, Calangianus, Siligo, Ardara, Thiesi, Usini, Sedini, Martis, Chiaramonti, Tula, Sorso, Sennori, Alghero and Sassari. In 1975 he moves to Sassari with his family: his wife Giovanna and daughter Roberta. Daniela is bom in 1977 and the family is complete in 1979 withthe birth of Diego.


At the same time he realistically paints still-life compositions of objects and fruits sensual in both form and colour: the “ Spinning tops “ ; the drawers in “ Findings “; “ Cans ; and the large “ Cabbages “ with outstretched arms waiting to greet someone. Yet he often of returns to the lyricism of the landscape, praising it in hig tones of emotion where the pure use of colour and the artist's skilful touch allow the frothy pencil marks to show through like animated notes of an allegro, sostenuto minuetto. Occasionally, his passion and love for nature erupts in protest and polemics as seen in a recent exhibition entitled “ Ladscaples as yet unsliced by motorways “.

In the last decade, while still identfying with the Kantian concept of art as wellas the Crocean concept regarding content and form, his work has reached a maturity of intents and physiognomy of clear modem synthesis and essentiaality , open to paces and atmodpheres of measured abstractions, in charming suggestions full of emblematic symbols and metaphors. His works are found in both public and private collections in Italy and abroad. 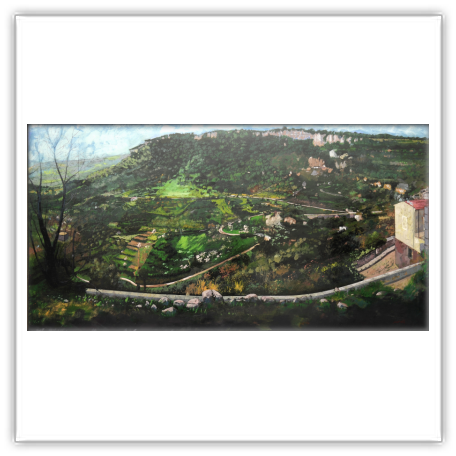